This is a full-time job, even for AVRs. On top of that, the information to be displayed on the screen has to be stored in RAM memory, and requires a lot more than the small amount of RAM available on most microcontrollers. Both connectors are through hole. The good news is that this display does not need the common “M” input, an oscillating input xmf to prevent the LCD crystals from being operated in DC mode. 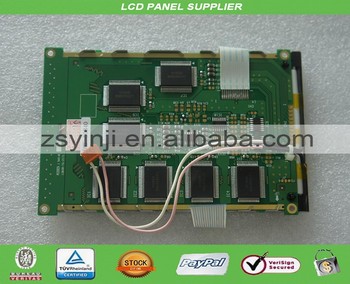 This display has the usual CCFL backlight, which requires an inverter. Once all lines are sent, the VSYNC signal needs to be toggled, indicating that the LCD needs to start at the top of the screen for the next line of data. Doing this fast enough will create the illusion to our eyes of a stable image. At the same time, the controller must provide an interface to the outside world to allow useful information to be sent to the display, so that there is something emf show the user interface.

QVGA resolution is horizontal by vertical. This LCD does not require any overscan.

Overscan is a left over from the dm CRT designs, where the controller needs to provide extra time between lines and frames to allow the 550840 beam to move to the next location beginning of next line or top of screen. There is also about 70 cycles overhead for each line register setup, Hsync, sometimes Vsync, Enable. As mentioned, one frame requires 19, nibbles of memory, which equates to 9, bytes. Most AVRs don’t have that much memory.

Therefore an external SRAM chip is used to store the bitmap.

Using the Read Cycle No. Note that the sbi and cbi instructions are not used here since they each require 2 cycles. The refresh is done using Timer0, which is executed every This is done by the function “WriteNibble”: As you can see, the Data Direction bits DDR are not set here since they are set to output at startup. The SRAM data bus is connected to bits 508440 is possible to use a DRAM chip. That saves 8 address pins. The drawback is that memory access is slower, since the memory address needs to be set in 2 steps.

Using page mode during the LCD refresh will reduce this somewhat. Keep in mind that the popular 28 pin AVRs like the Atmega do NOT have a complete 8 bit port available to use as an address interface when running with an external clock or crystal and using the Serial Portrequiring clumsy mdf manipulation code. The rest of the controller consists of an interrupt driven Serial handler, using a bytes input buffer, a general purpose TC1 timer used for bookkeeping purposes and the main forever loop which pulls graphic command data from the input buffer, parses them and updates the SRAM memory accordingly.

The controller will issue feedback if the input buffer has less than 50 bytes of free space, which could be changed to some form of software flow control.

Losing a byte will therefore disrupt the synchronization between the controller and the PC. A timeout mechanism is present to reset the graphics controller if no input has been received for 5 seconds. This controller is a simplification of a previous controller I built, the AVCX project based on another design. As a result, this project is much easier to implement and modify.

This implementation also has a built-in analog clock. The clock face uses x pixels, left aligned, leaving a pane of 60 x pixels on the right side for other uses.

No activity meaning no incoming graphic control commands for 1 minutes will also turn on the clock, as a screen saver. The initial version of this controller was built on a breadboard but was unreliable.

Once I made the board version, as shown in the picture above, using point to point wiring, these problems disappeared. Here are the connections: Atmegap connected to SRAM: WE Write Enable, active Low.

Atmegap connected to LCD: A more efficient version of the V supply is definitely possible, but I had this DC board ready to use. Please note that the Atmegap fuse needs to be set to Full Swing External Crystal to operate reliably I’ve learned that the dmg way. The user interface is currently driven by a demo application running on a PC.

Communication with a PC requires the use of an RS level converter. I used an external plug-in board for this. This requires that 4 pins PC PC5 are reserved, limiting the potential enhancements of this controller.

For example, an SPI interface would make the user communication faster. Driving this controller from another AVR board will be one of the next projects. Note that to change the baudrate, the controller software also has to be updated. A release build is included in the archive. The current user interface is an enhanced version of the AVCX protocol but it would be better to standardize the graphics interface to some industry standard. The SED provides an 8 bit parallel user interface, plus several control lines, including the A line indicating a command as opposed to data.

I have not seen a serial version of the SED interface. Standardizing on an industry standard would make porting of existing software easier.

Though not trivial, a serial version should be doable, even if not all features of the SED can be implemented. One feature is the use of various planes, specifically a graphics plane and a text plane. I have looked into doing that for the current controller but found it impossible to do.

Due to the lack of available memory and AVR pins for larger memory chipsit would require that the planes be dynamically merged, meaning at refresh time, while the current SRAM memory would be reserved for the graphics plane the internal AVR ram could be used for the text plane. The number of cycles needed for this dynamic merging exceed the available time, resulting in a very slow refresh rate. The AtmegaP, if it ever becomes available, has 16KB internal memory, meaning that it can hold both one graphics plane as well as the text plane.

The merged representation can thus be maintained in the SRAM chip and be used directly for the screen refresh ; any change in the graphics or text plane will be reflected in the merged representation immediately. One drawback of the SED user interface is that it is completely byte oriented; no individual pixel access is available which means that any pixel set requires a GRAM read, followed by a GRAM write unless the application itself maintains a frame buffer. 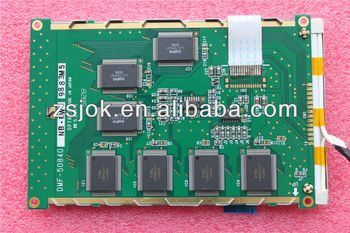 Here are the Schematics: Here is what the result looks like: Watch a video here: For suggestions and corrections, please contact me at: Back to Dutchtronix Projects.