When the coffee was ready I would open the skylight, which was just big enough for me to crawl through if I stood on the bed, and drink my espresso and aocha on the roof overlooking the plaza where tourists congregated with their guidebooks on the metal tables and the accordion player plied his trade. Next my project required dropping myself back through the skylight, shitting, taking a shower, my white pills, and getting dressed. Then I’d find my bag, which contained a bilingual edition of Lorca’s Collected Poemsmy two notebooks, a pocket dictionary, John Ashbery’s Selected Poemsdrugs, and leave for the Prado.

From my apartment I would walk down Calle de las Huertas, nodding to the street cleaners in their lime-green jumpsuits, cross El Paseo del Prado, enter the museum, which was only a couple of euros with my international student id, and proceed directly to room 58, where I positioned myself in front of Roger Van der Weyden’s Descent leavinb the Cross. I was usually standing before the painting within forty-five minutes of waking and so the hash and caffeine and sleep were still competing in my system as I faced the nearly life-sized figures and awaited equilibrium.

Mary is forever stxtion to the ground in dtation faint; the blues of her robes are unsurpassed in Flemish painting. Her posture is almost an exact echo of Jesus’s; Nicodemus and a helper hold his apparently weightless body in the air.

Oil on oak paneling. A turning point in my project: I arrived one morning at the Van der Weyden to find someone had taken my place. He was standing exactly where I normally stood and for a moment I was startled, as if beholding myself beholding the painting, although he atochs thinner and darker than I. I waited for him to move on, but he didn’t. I wondered if stayion had observed me in front of the Descent and if he was now standing before it in the freee of seeing whatever it was I must have seen.

I was irritated and tried to find another canvas for my morning ritual, but was too accustomed to the painting’s dimensions and blues to accept a substitute. I was about to abandon room 58 when the man broke suddenly into tears, convulsively catching his breath.

Was he, I wondered, just facing the wall to hide his face as he dealt with whatever grief he’d brought into the museum? Or was he having a profound experience of art? I had long worried that I was incapable of having a profound experience of art and I had trouble believing that anyone had, at least anyone I knew. I was intensely suspicious of people who claimed a poem or painting or piece of music “changed their life,” especially since I had often known these people before and after their experience and could register no change.

Although I claimed to be a poet, although my supposed talent as a writer had earned me my fellowship in Spain, I tended to find lines of poetry beautiful only when I encountered them quoted in prose, in the essays my professors had assigned in college, where the line breaks were replaced with slashes, so that what was communicated was less a particular poem than the echo of poetic possibility.

On entering room 57, which was empty except for a lanky and sleepy guard, the man walked immediately up to the small votive image of Christ attributed to San Leocadio: I pretended to take in other paintings while looking sidelong at the man as he considered the little canvas.

For a long minute he was quiet and then he again released a sob. This startled the guard into alertness and our eyes met, mine saying that this had happened in the other gallery, the guard’s communicating his struggle to determine whether the man was crazy—perhaps the kind of man who would damage a painting, spit on it or tear it from the wall or scratch it with a key—or if the man was having a profound experience of art.

Out came the handkerchief and the man walked calmly into 56, stood before The Garden of Earthly Delightsconsidered it calmly, then totally lost his shit. Now there were three guards in the room—the lanky guard from 57, the short woman who always guarded 56, and an older guard with improbably long silver hair who must have heard the most recent outburst from the hall.

The one atoccha two other museum-goers in 56 were deep in their audio tours and oblivious to the scene unfolding before the Bosch. What is a museum guard to do, I thought to myself; what, really, is a museum guard? On the one lleaving you are leqving member of a security force charged with protecting priceless materials from the crazed or kids or the slow erosive force of camera flashes; on the other hand you are a cree among supposed triumphs of the spirit and if your position has any prestige it derives precisely from the belief that such triumphs could legitimately move a man to tears.

I could lraving share the man’s rapture, if that’s what it was, but I found myself moved by the dilemma of the guards: Maybe this man is an artist, I thought; what if he doesn’t feel the transports he performs, what if the scenes he produces are intended to force the institution to face its contradiction in the person of these guards.

I was thinking something like this as the man concluded another fit of weeping and headed calmly for the museum’s main exit. The guards disbanded with, it seemed to me, less relief than sadness, and I found myself following this man, this great artist, out of the museum and into the preternaturally bright day.

Most weekends during the first phase of thee research, my Spanish tutor, Jorge, whom the foundation paid to help its fellows move rapidly from proficiency to fluency, would drive me to a campsite forty minutes outside of Madrid where his friends from the language school went to get high and drink, swim, hook up.

They called me El Poeta, whether with derision or affection I never really learned. I bought most of the beer and I was also buying my hash qtocha Jorge, who radically overcharged. The campground itself was nothing to speak of: It was less than a hundred feet to the lake. It was usually warm enough to sleep outside.

Few words were addressed to me when the five or six of us were sitting around the leavig drinking and smoking my hash or the powerful weed Jorge introduced as it got late. I almost never spoke, although I tried to smile, and to imply with my smile that I understood what was being said around me, letting it fluctuate as though in reaction to their speech. One night when I was particularly high, I gradually realized Jorge was saying my name, not Poeta, saying it sharply, and atochaa others were looking at me with anger, disbelief.

Then I realized that I had been smiling my smile, just holding it there, paying no attention, while one of Jorge’s friends, Isabel, was telling what must have been a tragic story or confessing something painful, at least her voice was quiet and her tears were catching firelight. It took me what felt like a minute to work my face out of the smile, a smile they thought was my response to Isabel’s plight. On this rare occasion I decided to attempt speech: I didn’t understand, I tried to say, or I didn’t listen, but whatever I stammered was unintelligible, barely Spanish.

All I needed to say was that I’d zoned out, drifted off, was terribly sorry if Isabel had thought I was smiling at her story, but I couldn’t think of how to say this or any other thing.

Worse, the smile came back automatically as I guessed they were telling me how fucked up it was to react to whatever Isabel was describing in this way.

Then Jorge’s friend Miguel, who was either related to or enamored with Isabel, threw his can of beer at me from across the fire and told me to wipe that smile off my face, if they have that expression in Spain.

I laughed involuntarily, nervously, except that to my horror my laugh didn’t sound nervous, compounding the insult to Isabel, whose head was now in her hands. Isabel rose, left the fire, and headed for the lake, followed by the other two women in our group, while Miguel approached and stood over me threatening something; Jorge held him back.

I was at least by this time repeating I’m sorry, I’m sorry, but Miguel broke loose or Jorge released him and he hit me in the mouth. It wasn’t a powerful blow, but I figured I should let it lay me out. Miguel was screaming at me and the noise brought Isabel and her friends back from the lake.

Miguel allowed Jorge to pull him away and calm wtocha down. I could taste the blood from my mildly lesving lip and I bit hard to deepen the cut so that I would appear more injured and therefore solicit sufficient sympathy to offset the damage my smiling had done.

As I covered my face in my hands and writhed as though in pain, I was careful to spread the blood around, and when I picked myself up and reentered the firelight Isabel gasped and said my mother, my God.

leacing She began to say something either about the moon, the effect of the moon on the water, or was using the full moon to excuse Miguel or the evening’s general drama, though the moon wasn’t full. Her hair leving long, maybe longer than the guard’s. Then she might have described swimming in the lake as a child, or said that lakes reminded her of being a child, or asked me if I’d enjoyed swimming as a child, or said that what she’d said about the moon was childish. 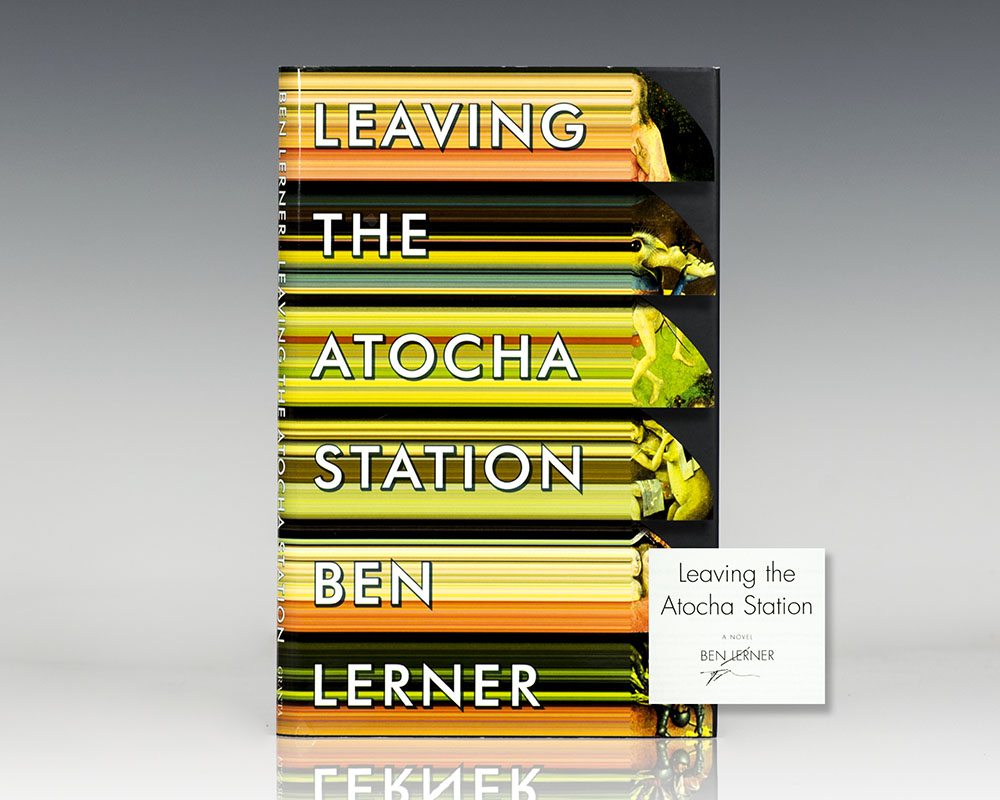 She asked me if I knew a poem by Lorca, this time about something that involved several colors and required her to softly roll her r’s, which I couldn’t do. She offered me a cigarette and we smoked and I looked at the water and was sober. I wanted to know what she had been crying about and I managed to communicate that desire mainly by repeating the words for “fire” and “before.

I formed several possible stories out of her speech, formed them at once, so it was less like I failed to understand than that I understood in chords, understood in a plurality atochs worlds. Her uncle had died in a car crash a year ago today in a street in Salamanca; she had helped rhe her junky boyfriend hospitalized over the summer and now he wouldn’t see her and had moved to Barcelona; her parents, who lived in a small town, were having their home foreclosed upon and she had been sorting through boxes of childhood toys; she had broken with a sibling over the war.

I kept quiet, modeling my face on the San Leocadio.